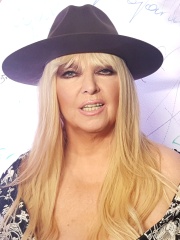 Maria Antonina Rodowicz, known professionally as Maryla Rodowicz, (Polish pronunciation: [maˈrɨla rɔˈdɔvit͡ʂ] born 8 December 1945 in Zielona Góra), is a Polish singer, guitarist and actress. Throughout over 50 years of her career, she released twenty Polish and four foreign-language studio albums including five with platinum and three with gold certifications and selling over 15 million records. Known for her close collaboration with Agnieszka Osiecka and Seweryn Krajewski, her most popular songs include "Małgośka" (1974), "Futbol" (1974), "Remedium" (1978), "Niech żyje bal" (1984), "Łatwopalni" (1997) and "Wszyscy chcą kochać" (2005). Read more on Wikipedia

Among SINGERS In Poland