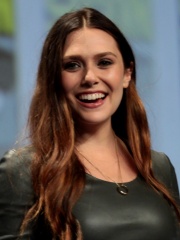 Elizabeth Chase Olsen (born February 16, 1989) is an American actress. Her breakthrough came in 2011 when she starred in the independent thriller drama Martha Marcy May Marlene, for which she was nominated for the Critics' Choice Movie Award for Best Actress and Independent Spirit Award for Best Female Lead, among other awards. She subsequently starred in the films Silent House (2011), Liberal Arts (2012), Oldboy (2013), Godzilla (2014), I Saw the Light (2015), Wind River (2017), and Ingrid Goes West (2017). Read more on Wikipedia

ComicBook.com
WandaVision: Kevin Smith Shares Throwback with Elizabeth Olsen and Paul Bettany
WandaVision is coming to an end on Friday, but the journey has been an exciting one these last few weeks. The show has been consistently one of the most talked-about things on social media since it premiered in January, and there are few people who seem to be…
Jamie Jirak