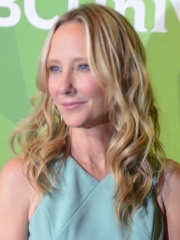 Anne Celeste Heche ( (listen) HAYTCH; May 25, 1969 – August 11, 2022) was an American actress, known for her roles in a variety of genres in film, television, and theater, receiving numerous accolades, including a National Board of Review Award and multiple Emmy Awards. Heche's professional acting career began on the soap opera Another World (1987–1991) portraying the twins Vicky Hudson and Marley Love, for which she received a Daytime Emmy Award in 1991. Her acting profile rose during the first half of the 1990s, gaining particular attention for her co-starring role in the independent film Walking and Talking (1996) and for her standout supporting role in the crime drama Donnie Brasco (1997). Read more on Wikipedia

Among actors, Anne Heche ranks 2,102 out of 9,996. Before her are Cecilia Roth, Bernhard Wicki, James Doohan, John C. McGinley, David Doyle, and Toni Servillo. After her are Per Oscarsson, Tom Sizemore, Aaron Paul, Sho Kosugi, Donald Crisp, and Kirin Kiki.