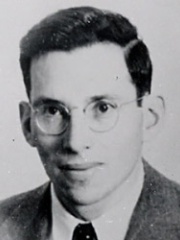 George Abramovich Koval (Russian: Жорж (Георгий) Абра́мович Кова́ль, IPA: [ˈʐorʐ (ɡʲɪˈorɡʲɪj) ɐˈbraməvʲɪtɕ kɐˈvalʲ] (listen), Zhorzh Abramovich Koval, December 25, 1913 – January 31, 2006) was an American who acted as a Soviet intelligence officer for the Soviet atomic bomb project. According to Russian sources, Koval's infiltration of the Manhattan Project as a GRU (Soviet military intelligence) agent "drastically reduced the amount of time it took for Russia to develop nuclear weapons."Koval was born to Russian Jewish immigrants in Sioux City, Iowa. As an adult, he traveled with his parents to the Soviet Union to settle in the Jewish Autonomous Region near the Chinese border. Koval was recruited by the Soviet GRU (military intelligence), trained, and assigned the code name DELMAR. He returned to the United States in 1940 and was drafted into the U.S. Read more on Wikipedia

Since 2007, the English Wikipedia page of George Koval has received more than 154,326 page views. His biography is available in 19 different languages on Wikipedia making him the 8,971st most popular politician.