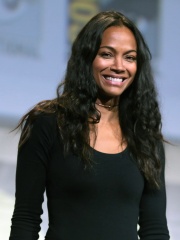 Zoë Yadira Saldaña-Perego (née Saldaña Nazario; born June 19, 1978) is an American-Dominican-Puerto Rican actress. Known primarily for her work in science fiction film franchises, she has appeared in four of the six highest-grossing films of all time (Avatar, Avatar: The Way of Water, Avengers: Infinity War, and Avengers: Endgame), a feat not achieved by any other performer. Her films have grossed more than $13 billion worldwide and, as of 2023, she is the second-highest-grossing film actress of all time, and the fourth actor overall.A trained dancer, Saldaña began her acting career in two 1999 episodes of Law & Order. Read more on Wikipedia