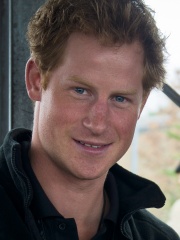 Prince Harry, Duke of Sussex, (Henry Charles Albert David; born 15 September 1984), is a member of the British royal family. As the younger son of Charles, Prince of Wales, and Diana, Princess of Wales, he is sixth in the line of succession to the British throne. Born in St Mary's Hospital, London, Harry was educated at Wetherby School, Ludgrove School, and Eton College. Read more on Wikipedia

Page views of Prince Harry, Duke of Sussexes by language

Among noblemen, Prince Harry, Duke of Sussex ranks 557 out of 843. Before him are John I, Count Palatine of Zweibrücken, Princess Therese of Saxe-Altenburg, Anne Marie Martinozzi, Princess Frederica Charlotte of Prussia, Odo II, Count of Blois, and Ebalus, Duke of Aquitaine. After him are Princess Adelgunde of Bavaria, Peter II, Duke of Brittany, Prince Emmanuel, Duke of Vendôme, Judith of Bohemia, Prince Friso of Orange-Nassau, and Sancho García of Castile.