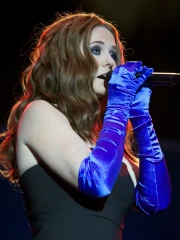 Elena Sergeevna Katina (Russian: Елена Сергеевна Катина; born 4 October 1984), better known as Lena Katina, is a Russian musician who gained fame as one half of the pop/electronica duo t.A.T.u. She started her career at the age of eight, joining the Russian children's act Avenue, soon after that joining Neposedy. In 1999, producer Ivan Shapovalov chose Katina and Julia Volkova for his project t.A.T.u.. Read more on Wikipedia

Among singers, Lena Katina ranks 924 out of 3,541. Before her are Margaret Price, Conchita Bautista, Alejandro Sanz, Lil Peep, Adrian Belew, and Elisabeth Söderström. After her are Mel B, Indila, Rosario Flores, Mango, Aino Ackté, and Sandra Kim.