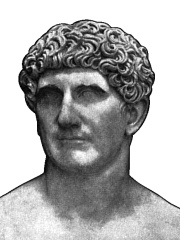 Marcus Antonius (14 January 83 BC – 1 August 30 BC), commonly known in English as Mark Antony, was a Roman politician and general who played a critical role in the transformation of the Roman Republic from a constitutional republic into the autocratic Roman Empire. Antony was a relative and supporter of Julius Caesar, and served as one of his generals during the conquest of Gaul and the Civil War. Antony was appointed administrator of Italy while Caesar eliminated political opponents in Greece, North Africa, and Spain. Read more on Wikipedia

Antony is most famous for his defeat at the Battle of Actium in 31 BC, where he was defeated by Octavian.

Among politicians, Mark Antony ranks 127 out of 15,577. Before him are Bayezid I, Otto I, Holy Roman Emperor, Amenhotep III, Lorenzo de' Medici, Xerxes I, and Claudius. After him are Narendra Modi, Bayezid II, Kim Jong-il, Francis I of France, Mehmed IV, and Murad II.

Others Born in 83 BC