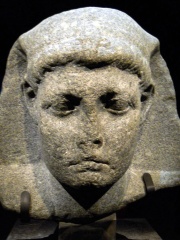 Ptolemy XV Caesar (; Greek: Πτολεμαῖος Ptolemaĩos; 23 June 47 BC – August 30 BC), nicknamed Caesarion (Καισαρίων, "Little Caesar"), was the last pharaoh of ancient Egypt, reigning with his mother Cleopatra from 2 September 44 BC until her death by 12 August 30 BC, then as sole ruler until his death was ordered by Octavian (who would become the first Roman emperor as Augustus). Caesarion was the eldest son of Cleopatra and the only known biological son of Julius Caesar, after whom he was named. Read more on Wikipedia

Caesarion was the son of Julius Caesar and Cleopatra VII. He was the last Pharaoh of Ancient Egypt.

Page views of Caesarions by language

Among politicians, Caesarion ranks 404 out of 15,577. Before him are Erich Honecker, Peisistratos, Frederick III, German Emperor, Boris Godunov, Maximilian I of Mexico, and Sergey Lavrov. After him are Louis X of France, Stephen I of Hungary, Servius Tullius, Abdullah of Saudi Arabia, Charles III of Spain, and Louis Bonaparte.

Others Born in 47 BC