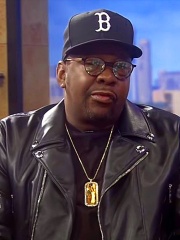 Robert Barisford Brown (born February 5, 1969) is an American singer and rapper. Brown, alongside frequent collaborator Teddy Riley, is noted as one of the pioneers of new jack swing: a fusion of hip hop and R&B. Brown started his career in the R&B and pop group New Edition, from its inception in 1978 until his exit from the group in December 1985.Once he started a solo career, Brown enjoyed commercial and critical success with his second album Don't Be Cruel (1988) which spawned five Billboard Hot 100 top 10 singles, including the number one hit "My Prerogative", and the Grammy Award-winning "Every Little Step". In 1989, Brown contributed two songs to the soundtrack of Ghostbusters II. In 1992, Brown married superstar singer Whitney Houston, with whom he later had a daughter named Bobbi Kristina Brown. Read more on Wikipedia