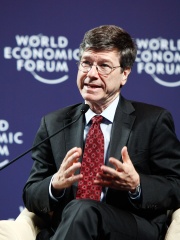 Jeffrey David Sachs (; born November 5, 1954) is an American economist, liberal, academic, public policy analyst and former director of The Earth Institute at Columbia University, where he holds the title of University Professor. He is known as one of the world's leading experts on economic development and the fight against poverty. Sachs is the Quetelet Professor of Sustainable Development at Columbia's School of International and Public Affairs and a professor of health policy and management at Columbia's School of Public Health. Read more on Wikipedia

Since 2007, the English Wikipedia page of Jeffrey Sachs has received more than 878,086 page views. His biography is available in 29 different languages on Wikipedia making him the 218th most popular economist.