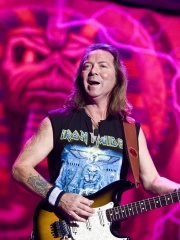 David Michael Murray (born 23 December 1956) is an English guitarist and songwriter. He is one of the earliest members of the British heavy metal band Iron Maiden, the second-longest members of the band, and along with the group's founder, bassist and primary songwriter Steve Harris, Murray is the only member who has appeared on all of the band's releases. Growing up in various areas of London, Murray became a member of a metalhead gang fighting skinheads before he took an interest in rock music at 15 and formed his own band, Stone Free, with childhood friend Adrian Smith. Read more on Wikipedia