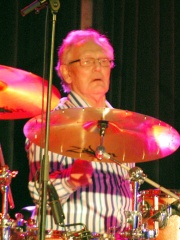 Peter Edward "Ginger" Baker (19 August 1939 – 6 October 2019) was an English drummer and a co-founder of the rock band Cream. His work in the 1960s and 1970s earned him the reputation of "rock's first superstar drummer", for a style that melded jazz and African rhythms and pioneered both jazz fusion and world music.Baker gained early fame as a member of Blues Incorporated and the Graham Bond Organisation, both times alongside bassist Jack Bruce, with whom Baker would often clash. In 1966, Baker and Bruce joined guitarist Eric Clapton to form Cream, which achieved worldwide success but lasted only until 1968, in part due to Baker's and Bruce's volatile relationship. Read more on Wikipedia

Ginger Baker is most famous for his drumming with Cream, Blind Faith, and the Rolling Stones.