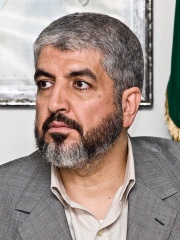 Khaled Mashal (Arabic: خالد مشعل, romanized: Khālid Mashʿal, Levantine Arabic: [xaːled meʃʕal], born 28 May 1956) is a former leader of the Palestinian organization Hamas. After the founding of Hamas in 1987, Mashal became the leader of the Kuwaiti branch of the organization. In 1992, he became a founding member of Hamas' politburo and its chairman. Read more on Wikipedia

Among politicians, Khaled Mashal ranks 6,328 out of 15,710. Before him are Ippolito II d'Este, Tippu Tip, Rei Kawakubo, King Kang of Zhou, Rhesus of Thrace, and Muhammad VIII al-Amin. After him are Robert I, Latin Emperor, Johan Nygaardsvold, Emperor Jomei, Radama II, Honoré II, Prince of Monaco, and Neferkare Neby.