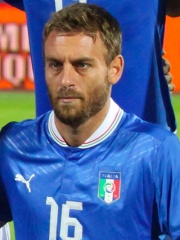 Daniele De Rossi (Italian pronunciation: [daˈnjɛːle de ˈrossi]; born 24 July 1983) is an Italian former professional footballer who played as a defensive midfielder. He is mostly known for his time playing with his hometown club Roma in Serie A. He is also a former Italy national team player. De Rossi made his professional debut with Roma during the 2001–02 season, and made his Serie A debut the following year. Read more on Wikipedia

Since 2007, the English Wikipedia page of Daniele De Rossi has received more than 2,133,827 page views. His biography is available in 55 different languages on Wikipedia making him the 517th most popular soccer player.