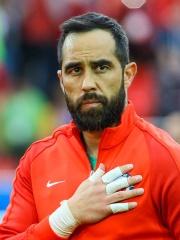 Claudio Andrés Bravo Muñoz (Spanish pronunciation: [ˈklawðjo ˈβɾaβo]; born 13 April 1983) is a Chilean professional footballer who plays as a goalkeeper for Spanish club Real Betis and the Chile national team. He started playing with Colo-Colo and moved to Real Sociedad in 2006, appearing in 237 official games with the latter club. Barcelona signed him for €12 million in 2014, and he won the treble and the Zamora Trophy in his first season. Read more on Wikipedia

Since 2007, the English Wikipedia page of Claudio Bravo has received more than 1,300,049 page views. His biography is available in 58 different languages on Wikipedia making him the 841st most popular soccer player.