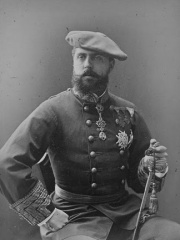 Don Carlos de Borbón y Austria-Este (Spanish: Carlos María de los Dolores Juan Isidro José Francisco Quirico Antonio Miguel Gabriel Rafael; 30 March 1848 – 18 July 1909) was the Carlist claimant to the throne of Spain from 1868 (his father's Spanish renunciation), and the Legitimist claimant to the throne of France after the death of his father in 1887. Read more on Wikipedia

Carlos, Duke of Madrid was born on November 6, 1716. He was the eldest son of King Felipe V and his wife, Elisabeth Farnese. Carlos was the heir to the Spanish throne until he renounced his rights in favor of his younger brother, who became King Ferdinand VI. Carlos was most famous for being the first person to live in the Palacio Real de Madrid, which is now the Royal Palace of Madrid.

Page views of Carlos, Duke of Madrids by language

Among noblemen, Carlos, Duke of Madrid ranks 222 out of 843. Before him are Grand Duchess Maria Pavlovna of Russia, Alfonso II d'Este, Duke of Ferrara, Archduke John of Austria, Infanta Maria Theresa of Portugal, Duchess Cecilie of Mecklenburg-Schwerin, and Princess Juliane of Saxe-Coburg-Saalfeld. After him are Henry I, Duke of Brabant, Prince John of the United Kingdom, Mathilde Bonaparte, Ernest II, Duke of Saxe-Coburg and Gotha, George, Duke of Brunswick-Calenberg, and Adolf, Duke of Holstein-Gottorp.

Among NOBLEMEN In Slovenia

Among noblemen born in Slovenia, Carlos, Duke of Madrid ranks 1.