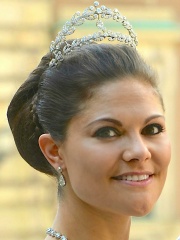 Victoria, Crown Princess of Sweden, Duchess of Västergötland (Victoria Ingrid Alice Désirée; born 14 July 1977) is the heir apparent to the Swedish throne, as the eldest child of King Carl XVI Gustaf. If she ascends to the throne as expected, she would be Sweden's fourth queen regnant (after Margaret, Christina and Ulrika Eleonora) and the first since 1720. Read more on Wikipedia

Page views of Victoria, Crown Princess of Swedens by language

Among noblemen, Victoria, Crown Princess of Sweden ranks 222 out of 842. Before her are Prince John of the United Kingdom, Duchess Marie of Mecklenburg-Schwerin, Hedvig Elisabeth Charlotte of Holstein-Gottorp, Princess Juliane of Saxe-Coburg-Saalfeld, Frederik, Crown Prince of Denmark, and Prince William, Duke of Cambridge. After her are Princess Sophie of Greece and Denmark, Louis, Count of Vendôme, Grand Duchess Maria Vladimirovna of Russia, Louise Marie Adélaïde de Bourbon, Duchess of Orléans, Carlos, Duke of Madrid, and Claude, Duke of Guise.