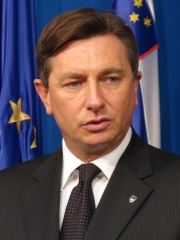 Borut Pahor (Slovene pronunciation: [ˈbóːɾut ˈpàːxɔɾ]; born 2 November 1963) is a Slovenian politician, serving as President of Slovenia since December 2012. He previously served as Prime Minister of Slovenia from November 2008 to February 2012. A longtime member and former president of the Social Democrats, Pahor served several terms as a member of the National Assembly and was its speaker from 2000 to 2004. Read more on Wikipedia

Borut Pahor is most famous for being the president of Slovenia.

Among politicians, Borut Pahor ranks 3,731 out of 15,577. Before him are Sophia of Prussia, Princess Alexandra of Greece and Denmark, Gnaeus Cornelius Scipio Calvus, Emperor Kenzō, Demetrius II Aetolicus, and Shepseskare. After him are Menahem, Natalia Alexeievna, Ivan Silayev, John IV of Trebizond, Deiphobus, and Paul Kagame.