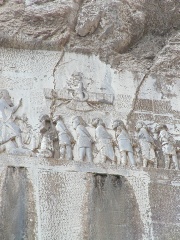 Bardiya (Old Persian: 𐎲𐎼𐎮𐎡𐎹 Bạrdiya), also known as Smerdis among the Greeks (Ancient Greek: Σμέρδις Smerdis) (possibly died 522 BC), was a son of Cyrus the Great and the younger brother of Cambyses II, both Persian kings. There are sharply divided views on his life. Read more on Wikipedia

Bardiya is most famous for being one of the sons of Cyrus the Great. He was killed by his brother Cambyses II.

Page views of Bardiyas by language

Among politicians, Bardiya ranks 3,082 out of 15,710. Before him are Than Shwe, Władysław Gomułka, Lucius Vitellius the Elder, Cayetana Fitz-James Stuart, 18th Duchess of Alba, Junichiro Koizumi, and Isabella of Aragon, Duchess of Milan. After him are Ivan Ribar, Frederick I, Elector of Brandenburg, Ivan Asen II of Bulgaria, Dương Văn Minh, David of Trebizond, and Władysław Anders.