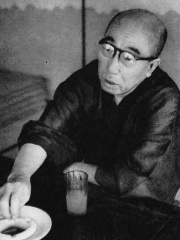 Tarō Hirai (平井 太郎, Hirai Tarō, October 21, 1894 – July 28, 1965), better known by the pseudonym Edogawa Ranpo (江戸川 乱歩), also romanized as Edogawa Rampo, was a Japanese author and critic who played a major role in the development of Japanese mystery fiction. Many of his novels involve the detective hero Kogoro Akechi, who in later books was the leader of a group of boy detectives known as the "Boy Detectives Club" (少年探偵団, Shōnen tantei dan). Ranpo was an admirer of Western mystery writers, and especially of Edgar Allan Poe. Read more on Wikipedia

Since 2007, the English Wikipedia page of Edogawa Ranpo has received more than 348,143 page views. His biography is available in 33 different languages on Wikipedia making him the 1,142nd most popular writer.