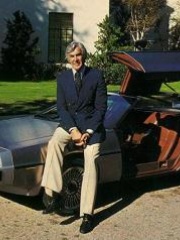 John Zachary DeLorean (January 6, 1925 – March 19, 2005) was an American engineer, inventor, and executive in the U.S. automobile industry, widely known for his work at General Motors and as founder of the DeLorean Motor Company.DeLorean managed the development of a number of vehicles throughout his career, including the Pontiac GTO muscle car, the Pontiac Firebird, Pontiac Grand Prix, Chevrolet Cosworth Vega, and the DMC DeLorean sports car, which was featured in the 1985 film Back to the Future. He was the youngest division chief in General Motors history, then left to start the DeLorean Motor Company (DMC) in 1973. Production delays meant that DMC's first car did not reach the consumer market until 1981, when a depressed buying market was compounded by lukewarm reviews from critics and the public. Read more on Wikipedia