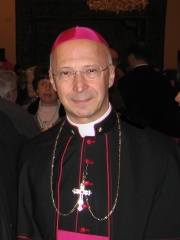 Angelo Bagnasco (Italian pronunciation: [ˈandʒelo baɲˈɲasko]; born 14 January 1943) is an Italian Cardinal of the Catholic Church. He was Archbishop of Genoa from 2006 to 2020. He was President of the Italian Episcopal Conference (CEI) from 2007 to 2017 and was elevated to the rank of cardinal in 2007. Read more on Wikipedia

Among religious figures, Angelo Bagnasco ranks 1,558 out of 2,272. Before him are Jacques Hamel, Flodoard, Alfred Delp, Hilarion Capucci, Stephen I of Constantinople, and Anno II. After him are Trifko Grabež, Caesarius of Africa, Mauro Piacenza, Prosper Grech, Moriteru Ueshiba, and Anastasios of Albania.