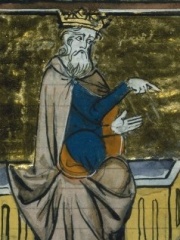 Baldwin I (Dutch: Boudewijn; French: Baudouin; July 1172 – c. 1205) was the first Emperor of the Latin Empire of Constantinople; Count of Flanders (as Baldwin IX) from 1194 to 1205 and Count of Hainaut (as Baldwin VI) from 1195-1205. Baldwin was one of the most prominent leaders of the Fourth Crusade, which resulted in the sack of Constantinople in 1204, the conquest of large parts of the Byzantine Empire, and the foundation of the Latin Empire. Read more on Wikipedia

Page views of Baldwin I, Latin Emperors by language

Among politicians, Baldwin I, Latin Emperor ranks 1,217 out of 15,710. Before him are Ottokar II of Bohemia, Sejo of Joseon, Fuxi, Princess Ludovika of Bavaria, Napoléon, Prince Imperial, and Ibrahim Pasha of Egypt. After him are Philippikos Bardanes, Ephialtes of Trachis, Humayun, 2nd Dalai Lama, Frank-Walter Steinmeier, and Napoléon Louis Bonaparte.