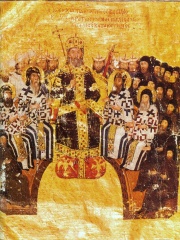 John VI Kantakouzenos or Cantacuzene (Greek: Ἰωάννης Ἄγγελος Παλαιολόγος Καντακουζηνός, Iōánnēs Ángelos Palaiológos Kantakouzēnós; Latin: Johannes Cantacuzenus; c. 1292 – 15 June 1383) was a Byzantine Greek nobleman, statesman, and general. He served as grand domestic under Andronikos III Palaiologos and regent for John V Palaiologos before reigning as Byzantine emperor in his own right from 1347 to 1354. Deposed by his former ward, he was forced to retire to a monastery under the name Joasaph Christodoulos and spent the remainder of his life as a monk and historian. Read more on Wikipedia

Among politicians, John VI Kantakouzenos ranks 1,480 out of 15,577. Before her are Jehu, Ladislaus I of Hungary, Tvrtko I of Bosnia, Viktor Orbán, Meñli I Giray, and Baldwin I, Latin Emperor. After her are Gwanghaegun of Joseon, Manuel Noriega, Alcide De Gasperi, Isaac I Komnenos, Charles II of Navarre, and Archduchess Maria Amalia of Austria.

Among people born in 1292, John VI Kantakouzenos ranks 1. After her are Ibn Qayyim al-Jawziyya, Joan II, Countess of Burgundy, Elizabeth of Bohemia, Stephen II, Ban of Bosnia, and Elisenda of Montcada. Among people deceased in 1383, John VI Kantakouzenos ranks 1. After her are Ferdinand I of Portugal, Matthew Kantakouzenos, Amadeus VI, Count of Savoy, Wenceslaus I, Duke of Luxembourg, Beatrice of Bourbon, Queen of Bohemia, Isabella of Valois, Duchess of Bourbon, Demetrios I Kantakouzenos, Radu I of Wallachia, Henry III, Duke of Mecklenburg, and Dmitry of Suzdal.