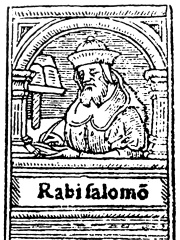 Shlomo Yitzchaki (Hebrew: רבי שלמה יצחקי‎; Latin: Salomon Isaacides; French: Salomon de Troyes, 22 February 1040 – 13 July 1105), today generally known by the acronym Rashi (see below), was a medieval French rabbi and author of a comprehensive commentary on the Talmud and commentary on the Hebrew Bible (the Tanakh). Acclaimed for his ability to present the basic meaning of the text in a concise and lucid fashion, Rashi appeals to learned scholars and beginning students, and his works remain a centerpiece of contemporary Jewish studies. His commentary on the Talmud, which covers nearly all of the Babylonian Talmud (a total of 30 out of 39 tractates, due to his death), has been included in every edition of the Talmud since its first printing by Daniel Bomberg in the 1520s. Read more on Wikipedia

Rashi is most famous for his commentary on the Bible.

Page views of Rashis by language

Among religious figures, Rashi ranks 483 out of 2,238. Before him are John Vianney, Saint Rosalia, Saint Florian, Michael I Cerularius, Umm Salama, and Laban. After him are Dorothea of Caesarea, Pope Soter, Jehoshaphat, Saint Spyridon, Antipope Clement VII, and Ansgar.

Among people born in 1040, Rashi ranks 2. Before him is Alfonso VI of León and Castile. After him are John Skylitzes, Géza I of Hungary, Al-Mu'tamid ibn Abbad, Håkan the Red, Ida of Lorraine, Ivo of Chartres, Sikelgaita, Conrad I, Count of Luxembourg, Geoffrey III, Count of Anjou, and Herman I of Baden. Among people deceased in 1105, Rashi ranks 2. Before him is Raymond IV, Count of Toulouse. After him are Frederick I, Duke of Swabia, Inge the Elder, Simon of Sicily, Malik-Shah II, Sukjong of Goryeo, Judith of Swabia, Anna Dalassene, and Huang Tingjian.