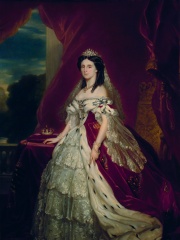 Princess Augusta Marie Luise Katharina of Saxe-Weimar-Eisenach (30 September 1811 – 7 January 1890) was the queen of Prussia and the first German empress as the consort of William I, German Emperor. Read more on Wikipedia

Page views of Augusta of Saxe-Weimar-Eisenaches by language

Among companions, Augusta of Saxe-Weimar-Eisenach ranks 190 out of 673. Before her are Matilda of Ringelheim, Maria Theresa of Austria, Constance of Aragon, Cecilia Bowes-Lyon, Countess of Strathmore and Kinghorne, Meritamen, and Joanna la Beltraneja. After her are Faustina the Elder, Philippa of Lancaster, Sophia Charlotte of Hanover, Juwayriyya bint al-Harith, Rachele Mussolini, and Joan the Lame.

Among companions born in Germany, Augusta of Saxe-Weimar-Eisenach ranks 28. Before her are Eleanor of Austria, Queen of Poland (1653), Emma of Waldeck and Pyrmont (1858), Alexandrine of Mecklenburg-Schwerin (1879), Cunigunde of Luxembourg (978), Princess Charlotte of Prussia (1860), and Matilda of Ringelheim (894). After her are Sophia Charlotte of Hanover (1668), Elisabeth Christine of Brunswick-Wolfenbüttel-Bevern (1715), Sophia Dorothea of Celle (1666), Princess Wilhelmine of Baden (1788), Louisa Ulrika of Prussia (1720), and Maria Barbara Bach (1684).