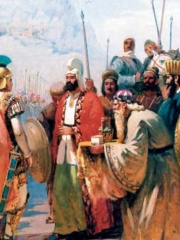 Atropates (Old Persian: *Ātr̥pātaʰ and Middle Persian Ātūrpāt; Ancient Greek: Ἀτροπάτης Atropátēs; c. 370 BC - after 321 BC) was a Persian nobleman who served Darius III, then Alexander the Great, and eventually founded an independent kingdom and dynasty that was named after him. Read more on Wikipedia

Atropates is most famous for being a poison that was used to kill Alexander the Great.

Page views of Atropates by language

Among politicians, Atropates ranks 2,873 out of 15,577. Before him are Süleyman Çelebi, Christine of France, Jomo Kenyatta, Jehoash of Israel, Canute VI of Denmark, and Wenceslaus I of Bohemia. After him are Princess Feodora of Leiningen, Smendes, Şehzade Mehmed, Dési Bouterse, Vincenzo Gonzaga, Duke of Mantua, and Yeon Gaesomun.

Among people born in 400 BC, Atropates ranks 8. Before him are Tollund Man, Parmenion, Porus, Berossus, Theopompus, and Spitamenes. After him are Teos of Egypt, Nectanebo II, Agnodice, Stateira I, Leochares, and Ephorus. Among people deceased in 360 BC, Atropates ranks 3. Before him are Democritus and Agesilaus II. After him are Agnodice, Campaspe, Dinocrates, Aeschines of Sphettus, Artabazos II, Lais of Corinth, Polykleitos the Younger, Leontion, and Anniceris.