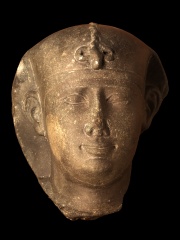 Nectanebo II (Manetho's transcription of Egyptian Nḫt-Ḥr-(n)-Ḥbyt, "Strong is Horus of Hebit"), ruled in 360–342 BC was the third and last pharaoh of the Thirtieth Dynasty of Egypt as well as the last native ruler of ancient Egypt.Under Nectanebo II, Egypt prospered. During his reign, the Egyptian artists developed a specific style that left a distinctive mark on the reliefs of the Ptolemaic Kingdom. Like his indirect predecessor Nectanebo I, Nectanebo II showed enthusiasm for many of the cults of the gods within ancient Egyptian religion, and more than a hundred Egyptian sites bear evidence of his attentions. Read more on Wikipedia

Nectanebo II is most famous for being the last pharaoh of Ancient Egypt.

Among politicians, Nectanebo II ranks 3,008 out of 15,710. Before him are Felipe González, Pekah, Adélaïde of France, Joko Widodo, Francis, Count of Vendôme, and Winnie Madikizela-Mandela. After him are Omri, Carin Göring, William Pitt the Younger, Hystaspes, Cleopatra Eurydice of Macedon, and Wolfgang Schäuble.

Others Deceased in 343 BC