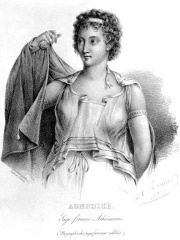 Page views of Agnodices by language

Among people born in 400 BC, Agnodice ranks 58. Before her are Crantor, Apama, Archidamus IV, Hecataeus of Abdera, Crates of Athens, and Antimachus. After her are Aeneas Tacticus, Lucius Cornelius Scipio Barbatus, Timotheus, Taxiles, Acrotatus II, and Meleager. Among people deceased in 360 BC, Agnodice ranks 11. Before her are Dinocrates, Aeschines of Sphettus, Lais of Corinth, Bryaxis, Anniceris, and Polykleitos the Younger. After her are Taxiles, Artabazos II, Philitas of Cos, Aristides of Thebes, Laomedon of Mytilene, and Stasanor.