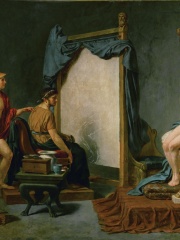 Campaspe (; Greek: Καμπάσπη, Kampaspē), or Pancaste (; Greek: Πανκάστη, Pankastē; also Pakate), was a supposed mistress of Alexander the Great and a prominent citizen of Larissa in Thessaly. No Campaspe appears in the five major sources for the life of Alexander and the story may be apocryphal. The biographer Robin Lane Fox traces her legend back to the Roman authors Pliny (Natural History), Lucian of Samosata and Aelian's Varia Historia. Read more on Wikipedia

Since 2007, the English Wikipedia page of Campaspe has received more than 59,001 page views. Her biography is available in 15 different languages on Wikipedia. Campaspe is the 157th most popular social activist (up from 164th in 2019), the 301st most popular biography from Greece and the 3rd most popular Greek Social Activist.

Page views of Campaspes by language

Among people born in 400 BC, Campaspe ranks 19. Before her are Mithridates I of Pontus, Atropates, Harpalus, Chares of Lindos, Titus Manlius Imperiosus Torquatus, and Attalus. After her are Zoilus, Dinocrates, Stateira I, Orestes of Macedon, Drypetis, and Hegesias of Cyrene. Among people deceased in 360 BC, Campaspe ranks 4. Before her are Democritus, Agesilaus II, and Atropates. After her are Dinocrates, Aeschines of Sphettus, Lais of Corinth, Bryaxis, Anniceris, Polykleitos the Younger, Agnodice, and Taxiles.

Among SOCIAL ACTIVISTS In Greece