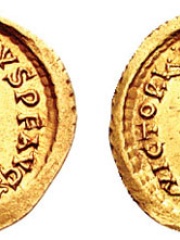 Marcian (; Latin: Flavius Marcianus; Greek: Μαρκιανός; c. 392 – 26 January 457) was the Eastern Roman Emperor from 450 to 457. Very little of his life before becoming emperor is known, other than that he was a domesticus (personal assistant) who served under the commanders Ardabur and his son Aspar for fifteen years. Read more on Wikipedia

Since 2007, the English Wikipedia page of Marcian has received more than 281,173 page views. His biography is available in 54 different languages on Wikipedia making him the 752nd most popular politician.

Page views of Marcians by language

Among politicians, Marcian ranks 747 out of 14,801. Before him are Pedro I of Brazil, Andromache, John the Fearless, John III of Sweden, Turgut Özal, and Manuel II Palaiologos. After him are Ecgberht, King of Wessex, Artemisia I of Caria, Louis Antoine de Saint-Just, Anastasius I Dicorus, Vlad II Dracul, and Aurangzeb.