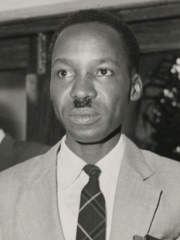 Julius Kambarage Nyerere (Swahili pronunciation: [ˈdʒuːlius kɑmˈbɑɾɑgɑ ɲɛˈɾɛɾɛ]; 13 April 1922 – 14 October 1999) was a Tanzanian anti-colonial activist, politician, and political theorist. He governed Tanganyika as Prime Minister from 1961 to 1962 and then as President from 1963 to 1964, after which he led its successor state, Tanzania, as President from 1964 to 1985. He was a founding member and chair of the Tanganyika African National Union (TANU) party, and of its successor Chama Cha Mapinduzi, from 1954 to 1990. Read more on Wikipedia

Julius Nyerere was a Tanzanian politician who was president of Tanzania from 1961 to 1985. He is most famous for his "African socialism" and his goal of Ujamaa, which is Swahili for "familyhood."

Among politicians, Julius Nyerere ranks 2,299 out of 15,710. Before him are Peter II of Portugal, Jephthah, Milada Horáková, Gian Galeazzo Visconti, Kęstutis, and Nogai Khan. After him are Peng Dehuai, Hyeonjong of Joseon, Clovis IV, Maximilian III Joseph, Elector of Bavaria, Nikola Pašić, and Seleucus II Callinicus.