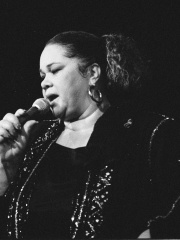 Jamesetta Hawkins (January 25, 1938 – January 20, 2012), known professionally as Etta James, was an American singer who performed in various genres, including blues, R&B, soul, rock and roll, jazz and gospel. Starting her career in 1954, she gained fame with hits such as "The Wallflower", "At Last", "Tell Mama", "Something's Got a Hold on Me", and "I'd Rather Go Blind". She faced a number of personal problems, including heroin addiction, severe physical abuse, and incarceration, before making a musical comeback in the late 1980s with the album Seven Year Itch.James's powerful, deep, earthy voice bridged the gap between rhythm and blues and rock and roll. Read more on Wikipedia

Etta James is best known for her soulful, gritty vocals. She has been a major influence on many other singers, such as Janis Joplin and Bonnie Raitt.