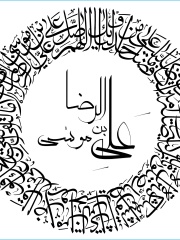 Ali ibn Musa al-Ridha (Arabic: عَلِيّ ٱبْن مُوسَىٰ ٱلرِّضَا‎, romanized: Alī ibn Mūsā al-Riḍā; c. 1 January 766 – 6 June 818), also spelled Rida or Reza in Persian, also known as Abu al-Hasan, was a descendant of the Islamic prophet Muhammad, and the eighth Imam in Twelver Shia Islam, after his father Musa al-Kadhim, and before his son Muhammad al-Jawad. He was an Imam of knowledge according to the Zaydi (Fiver) Shia school. Read more on Wikipedia

Ali al-Ridha is most famous for his role as the eighth Imam of Shi'a Islam. He is also known for his stature as a scholar and theologian.

Among religious figures, Ali al-Ridha ranks 376 out of 2,272. Before him are Pope John IV, Pope Clement III, Joel, Saint Monica, Saint Florian, and Wenceslaus I, Duke of Bohemia. After him are Clement of Ohrid, Pope Marcellus I, John Climacus, Maximus the Confessor, Pope John IX, and Dietrich Bonhoeffer.

Among people born in 770, Ali al-Ridha ranks 5. Before him are Michael II, Michael I Rangabe, Pope Stephen IV, and Einhard. After him are Pepin the Hunchback, Al-Hakam I, Habash al-Hasib al-Marwazi, Maria of Amnia, Hugh of Tours, Theodosia, wife of Leo V, and Prokopia. Among people deceased in 818, Ali al-Ridha ranks 1. After him are Theophanes the Confessor, Ermengarde of Hesbaye, and Bernard of Italy.