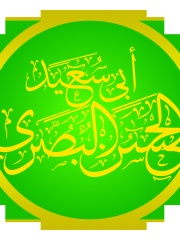 Hasan ibn Yasar (Arabic: حسن ابن يسار, romanized: Ḥasan ibn Yasār; c. 642 – 15 October 728), better known as Hasan of Basra (Arabic: حسن البصري, romanized: Ḥasan al-Baṣrī), was an early Sunni Muslim preacher, ascetic, theologian, exegete, scholar, judge, and mystic. Born in Medina in 642, Hasan belonged to the second generation of Muslims, all of whom would subsequently be referred to as the tābiʿūn in Sunni Islamic piety. In fact, Hasan rose to become one of "the most celebrated" of the tābiʿūn, enjoying an "acclaimed scholarly career and an even more remarkable posthumous legacy in Islamic scholarship."Hasan, revered for his austerity and support for "renunciation" (zuhd), preached against worldliness and materialism during the early days of the Umayyad Caliphate, with his passionate sermons casting a "deep impression on his contemporaries." His close relationships with several of the most prominent companions of the prophet Muhammad only strengthened his standing as a teacher and scholar of the Islamic sciences. Read more on Wikipedia

Hasan al-Basri is most famous for his teachings on the Quran and the Sunnah.

Among philosophers, Hasan al-Basri ranks 217 out of 1,089. Before him are Melissus of Samos, Gabriel Marcel, Miguel de Unamuno, Swami Vivekananda, Paulo Freire, and Bernard Bolzano. After him are Hippias, Imre Lakatos, Gaston Bachelard, Diotima of Mantinea, Joseph de Maistre, and Paul Feyerabend.

Among PHILOSOPHERS In Saudi Arabia

Among philosophers born in Saudi Arabia, Hasan al-Basri ranks 2. Before him are Muhammad ibn Abd al-Wahhab (1703).