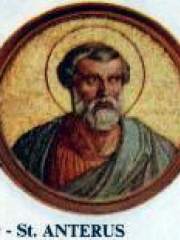 Pope Anterus (Latin: Anterus,Classical Greek: Ανθηρός (Antheros),Church Slavonic: Священномученик Анфир Римский, папа Римский) was the bishop of Rome from 21 November 235 to his death on 3 January 236.Anterus was the son of Romulus, born in Petilia Policastro, Calabria. He is thought to have been of Greek origin, and his name may indicate that he was a freed slave. He succeeded Pope Pontian, who had been deported from Rome to Sardinia, along with the antipope Hippolytus. He created one bishop, for the city of Fondi.Some scholars believe Anterus was martyred, because he ordered greater strictness in searching into the acts of the martyrs, exactly collected by the notaries appointed by Pope Clement I. Read more on Wikipedia

Pope Anterus is most famous for being the first pope to die in office.