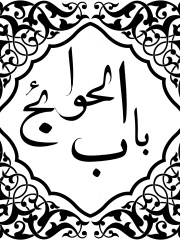 Musa ibn Ja'far al-Kadhim (Arabic: مُوسَىٰ ٱبْن جَعْفَر ٱلْكَاظِم‎, Mūsā ibn Jaʿfar al-Kāẓim), also spelled and al-Kazim, and also known as Abu al-Hasan, Abu Abd Allah orAbu Ibrahim, was the seventh Shia Imam after his father Ja'far al-Sadiq who was also a shia. He is regarded by Sunnis as a renowned scholar, and was a contemporary of the Abbasid caliphs Al-Mansur, Al-Hadi, Al-Mahdi and Harun al-Rashid. He was imprisoned several times; finally dying in Baghdad in the Sindi ibn Shahak prison. Read more on Wikipedia

Since 2007, the English Wikipedia page of Musa al-Kadhim has received more than 351,001 page views. His biography is available in 34 different languages on Wikipedia making him the 462nd most popular religious figure.

Most Popular RELIGIOUS FIGURES in Wikipedia