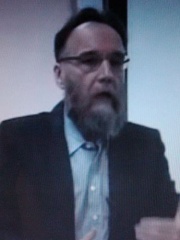 Aleksandr Gelyevich Dugin (Russian: Александр Гельевич Дугин; born 7 January 1962) is a Russian political philosopher, analyst, and strategist known for views widely characterized as fascist.Considered by some in the West to be "Putin's brain," or "Putin's philosopher," Dugin is believed by some to have been the brains behind Russia's annexation of Crimea as part of Dugin's advocacy for Ukraine becoming "a purely administrative sector of the Russian centralized state", which he refers to as Novorossiya. Dugin is also believed to have laid the ideological groundwork for the Russian invasion of Ukraine in 2022. Dugin calls for an illiberal totalitarian Russian Empire to control the Eurasian continent from Dublin to Vladivostok to challenge America and "Atlanticism".He was the main organizer of the National Bolshevik Front, the Eurasia Party and, together with Eduard Limonov, their forerunner, the National Bolshevik Party. Read more on Wikipedia

Among POLITICAL SCIENTISTS In Russia