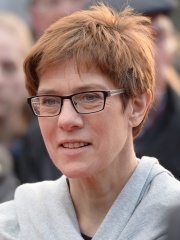 Annegret Kramp-Karrenbauer (German pronunciation: [ˈanəɡʁeːt ˈkʁamp ˈkaʁənˌbaʊɐ]; born 9 August 1962), sometimes referred to by her initials of AKK, is a German politician. She served as Minister of Defence from July 2019 to December 2021 and is a former Leader of the Christian Democratic Union (CDU). On 10 February 2020, Kramp-Karrenbauer announced that she would resign her position as CDU leader later in the year and would not put herself forward as a candidate for chancellor for the 2021 federal election. Read more on Wikipedia

Among politicians, Annegret Kramp-Karrenbauer ranks 6,372 out of 15,710. Before her are Ebroin, Xiao Xin, Pierre Nkurunziza, Margareta of Romania, Mithridates II of Pontus, and Sardanapalus. After her are Masaharu Homma, Baibars II, Göran Persson, Fujiwara no Kamatari, Philip de Montmorency, Count of Horn, and Nepherites II.