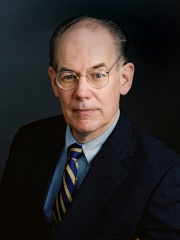 John Joseph Mearsheimer (; born December 14, 1947) is an American political scientist and international relations scholar, who belongs to the realist school of thought. He is the R. Wendell Harrison Distinguished Service Professor at the University of Chicago. He has been described as the most influential realist of his generation.Mearsheimer is best known for developing the theory of offensive realism, which describes the interaction between great powers as being primarily driven by the rational desire to achieve regional hegemony in an anarchic international system. Read more on Wikipedia