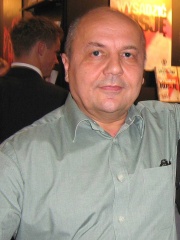 Vladimir Bogdanovich Rezun (Russian: Владимир Богданович Резун; born 20 April 1947), known by his pseudonym of Viktor Suvorov (Виктор Суворов) is a former Soviet GRU officer who is the author of non-fiction books about World War II, the GRU and the Soviet Army, as well as fictional books about the same and related subjects. After defecting to the United Kingdom in 1978, Suvorov began his writing career, publishing his first books in the 1980s about his own experiences and the structure of the Soviet military, intelligence, and secret police. He writes in Russian with a number of his books translated into English, including his semi-autobiographical The Liberators (1981). Read more on Wikipedia

Among writers, Viktor Suvorov ranks 1,539 out of 5,794. Before him are Hélène Cixous, Robert Silverberg, Per Wahlöö, Josep Pla, Alphonse Allais, and John Edward Williams. After him are Edward Lear, Jules Romains, Trygve Gulbranssen, Valery Bryusov, Rubem Fonseca, and Gil Vicente.