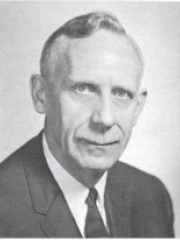 Hendrik Wade Bode ( boh-dee; Dutch: [ˈbodə]) (December 24, 1905 – June 21, 1982) was an American engineer, researcher, inventor, author and scientist, of Dutch ancestry. As a pioneer of modern control theory and electronic telecommunications he revolutionized both the content and methodology of his chosen fields of research. His synergy with Claude Shannon, the father of information theory, laid the foundations for the technological convergence of the information age. He made important contributions to the design, guidance and control of anti-aircraft systems during World War II. He helped develop the automatic artillery weapons that defended London from the V-1 flying bombs during WWII. After the war, Bode along with his wartime rival Wernher von Braun developer of the V1, and, later, the father of the US space program, served as members of the National Advisory Committee for Aeronautics (NACA), the predecessor of NASA. Read more on Wikipedia

Since 2007, the English Wikipedia page of Hendrik Wade Bode has received more than 92,427 page views. His biography is available in 18 different languages on Wikipedia making him the 208th most popular engineer.