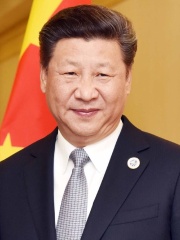 Xi Jinping (simplified Chinese: 习近平; traditional Chinese: 習近平; pinyin: Xí Jìnpíng, [ɕǐ tɕîn pʰǐŋ]; born 15 June 1953) is a Chinese politician who has served as General Secretary of the Chinese Communist Party (CCP) and Chairman of the Central Military Commission (CMC) since 2012, and President of the People's Republic of China (PRC) since 2013. Xi has been the paramount leader of China, the most prominent political leader in China, since 2012. The son of Chinese Communist veteran Xi Zhongxun, he was exiled to rural Yanchuan County as a teenager following his father's purge during the Cultural Revolution, and lived in a cave in the village of Liangjiahe, where he joined the CCP and worked as the party secretary. Read more on Wikipedia

Xi Jinping is most famous for being the President of China.

Among politicians, Xi Jinping ranks 287 out of 15,710. Before him are Lee Kuan Yew, Bill Clinton, Herod Antipas, Jacques Chirac, Charles VIII of France, and Eva Perón. After him are Alexander II of Russia, Victor Emmanuel II of Italy, Nerva, Croesus, Sejong the Great, and Rudolf II, Holy Roman Emperor.