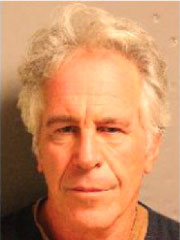 Jeffrey Edward Epstein ( EP-steen; January 20, 1953 – August 10, 2019) was an American financier and convicted sex offender. Epstein, who was born and raised in Brooklyn, New York City, began his professional life by teaching at the Dalton School in Manhattan, despite lacking a college degree. After his dismissal from the school, he entered the banking and finance sector, working at Bear Stearns in various roles; he eventually started his own firm. Read more on Wikipedia

Jeffrey Epstein is most famous for being a convicted pedophile.

Independent
What were Prince Andrew’s ties to Ghislaine Maxwell and Jeffrey Epstein?
Duke of York may have hoped to avoid further embarrassment during socialite’s trial but a single image reminded the world of his intimate ties to the scandal embroiling him
Bevan Hurley
Daily Beast
Jeffrey Epstein Pal Leon Black Claims Rape Accuser Was Part of a Corporate ‘Coup’
Patrick T. Fallon/Bloomberg via GettyAs billionaire Leon Black fights a former model’s rape lawsuit in a Manhattan court, he’s roping in other high-profile...
Kate Briquelet
CNBC
Convicted Jeffrey Epstein procurer Ghislaine Maxwell files sealed motion arguing for new trial after bombshell juror disclosure
Lawyers for Ghislaine Maxwell have pointed to revelations of a juror who convicted her of crimes related to sex abuser Jeffrey Epstein in a bid for a new trial.
Dan Mangan
Newsweek
Bill Clinton Aide Disputes Suggestion He Was 'Like Brothers' With Jeffrey Epstein
An aide told Newsweek it is "ridiculous" to suggest the ex-president was "like brothers" with Jeffrey Epstein after a new documentary.
Jack Royston