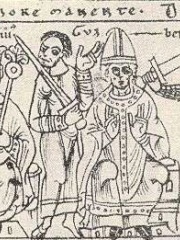 Guibert or Wibert of Ravenna (c. 1029 – 8 September 1100) was an Italian prelate, archbishop of Ravenna, who was elected pope in 1080 in opposition to Pope Gregory VII and took the name Clement III. Gregory was the leader of the movement in the church which opposed the traditional claim of European monarchs to control ecclesiastical appointments, and this was opposed by supporters of monarchical rights led by the Holy Roman Emperor. This led to the conflict known as the Investiture Controversy. Read more on Wikipedia

Among people born in 1025, Antipope Clement III ranks 2. Before him is Anne of Kiev. After him are Agnes of Poitou, Rudolf of Rheinfelden, Emperor Go-Reizei, Floris I, Count of Holland, Werner I, Count of Klettgau, John Italus, Ruben I, Prince of Armenia, and Edith of Wessex. Among people deceased in 1100, Antipope Clement III ranks 4. Before him are Godfrey of Bouillon, William II of England, and Parascheva of the Balkans. After him are Emperor Zhezong, George Kedrenos, Gudrid Thorbjarnardóttir, Naropa, Bretislav II, Edmund of Scotland, and Leonti Mroveli.

Among SOCIAL ACTIVISTS In Italy