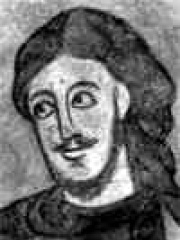 Bretislaus II (Czech: Břetislav II.; c. 1060 – 22 December 1100) was the duke of Bohemia from 14 September 1092 until his death. He was the eldest son of King Vratislaus II and Adelaide, daughter of Andrew I of Hungary. Read more on Wikipedia

Among people born in 1100, Bretislav II ranks 44. Before him are Ingegerd of Norway, Antipope Theodoric, Abu Bakr ibn Umar, Abu Sa'id Gardezi, William V, Marquess of Montferrat, and Thoros of Edessa. After him are Malmfred of Kiev, Peter Bartholomew, Malik Shah, Duqaq, Svatopluk, Duke of Bohemia, and Tzachas. Among people deceased in 1100, Bretislav II ranks 7. Before him are Godfrey of Bouillon, Parascheva of the Balkans, William II of England, Antipope Clement III, Emperor Zhezong, and George Kedrenos. After him are Naropa and Edmund of Scotland.