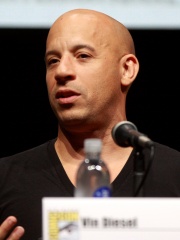 Mark Sinclair (born July 18, 1967), known professionally as Vin Diesel, is an American actor and producer. One of the world's highest-grossing actors, he is best known for playing Dominic Toretto in the Fast & Furious franchise. Diesel began auditioning for roles in the early 1990s but struggled to gain roles and instead decided to make his own low-budget film. Read more on Wikipedia

Vin Diesel is most famous for his role as Dominic Toretto in the Fast and Furious franchise.

Among actors, Vin Diesel ranks 74 out of 10,030. Before him are Jon Voight, Will Smith, Brad Pitt, Gina Lollobrigida, Catherine Deneuve, and Liam Neeson. After him are Clark Gable, Gérard Depardieu, Toshiro Mifune, Paul Newman, Tom Hanks, and Jane Fonda.