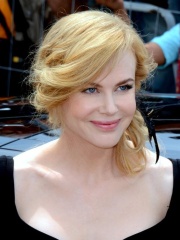 Nicole Mary Kidman (born 20 June 1967) is an American-Australian actress and producer. Known for her work across various film and television productions from several genres, she has continuously remained one of the world's highest-paid actresses. Read more on Wikipedia

Nicole Kidman is most famous for her role in the movie Moulin Rouge, as well as her marriage to actor Tom Cruise.

Among people born in 1967, Nicole Kidman ranks 4. Before her are Vin Diesel, Jason Statham, and Kurt Cobain. After her are Julia Roberts, Roberto Baggio, Suman Pokhrel, Jürgen Klopp, David Guetta, Kane, Sung Jae-gi, and Willem-Alexander of the Netherlands.