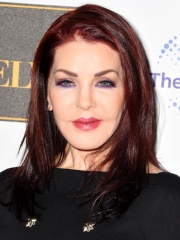 Priscilla Anne Presley (née Wagner, changed by adoption to Beaulieu; born May 24, 1945) is an American businesswoman and actress. She is the former wife of American singer Elvis Presley, as well as co-founder and former chairwoman of Elvis Presley Enterprises (EPE), the company that turned Graceland into one of the top tourist attractions in the United States. Read more on Wikipedia

Priscilla Presley is most famous for being the ex-wife of Elvis Presley.

Among companions, Priscilla Presley ranks 133 out of 687. Before her are Louise of Hesse-Kassel, Marie of Anjou, Inês de Castro, Elena of Montenegro, Caterina Sforza, and Olga Constantinovna of Russia. After her are Marie Adélaïde of Savoy, Caroline of Baden, Mumtaz Mahal, Malhun Hatun, Maria Luisa of Savoy, and Sophia Dorothea of Hanover.